When Jenay and Chris got here at the beginning of the month, I couldn’t wait to show off my beautiful new house to them. I had slaved all weekend to get the house looking its best.

And when (I thought) the tour had ended, and Michael headed to the back door and said,”Wait until you see the backyard!”–my heart dropped.
Because my backyard needs some serious lovin’. In a bad way. We’ve just had a lot going on/have procrastinated since we bought our house last summer. We haven’t done much except mow the law since then, which brings us to where we are now. You reap what you sow. Or what you don’t weed, in our case.
I could tell that Chris and Jenay didn’t quite know what to say when they saw the backyard. The freeze-burned/killed tropical plants, including a large group of obviously suffering philodendrons. The very dead banana tree patch. The horrifically weedy/ferny/ugly garden patch right around the outside of the kitchen. The leaning treehouse covered in ivy with an old tarp as a roof. The broken wooden swing hanging from the tree. A very stained, very dirty, very hand-me-down kids’ picnic table. Some old plastic patio furniture standing awkwardly next to big piles of dried brown Christmas tree branches Michael chopped up after Christmas to use for our fireplace. The stone statue of a squirrel with one ear missing.
And that’s just the backyard.
Needless to say, both Michael and I realized at that moment that we needed to spend some time in the backyard VERY soon, BEFORE the onslaught of Houston summer heat arrives in a few weeks. We have talked many times about all of our plans for the front and backyard, and it felt so good to finally get started!
This weekend was Chris and Jenay’s last with us. And when Chris asked me what house project he could help with this weekend, Michael and I knew exactly what to say! Michael and Chris spent all day long working on our yard yesterday, and I was so excited and proud of their work!!!
There is still A LOT of work to do on our yard, but here’s a summary of what they accomplished yesterday: 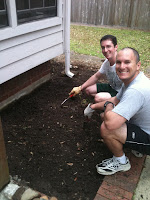 Chris and Michael about to plant the herbs 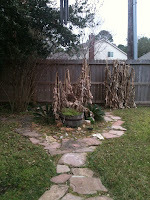 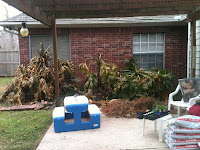 The Suffering Philodendrons 🙁 I’m hoping they’re not entirely dead, and some pruning and time will have them up and perky again one day. 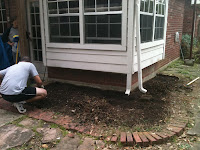 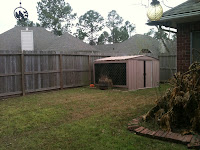 Note the rotting, folded-up pumpkins from Halloween that I somehow thought would magically disappear behind that dead plant in a pot next to our storage shed…how classy 🙂 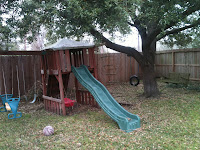 Our Leaning Treehouse, de-ivyed already by Michael. It’s surprisingly sturdy! I want my friends to know this because they all avoid letting their children play on it when they come over! 🙂 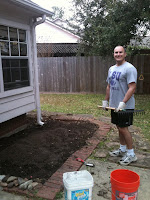 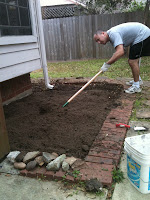 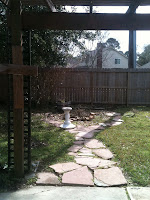 The Dead Banana Tree/Tropical Plants patch is CLEARED! Who knew there was that stone column thingy hidden in there? Michael wants to install a pond in this area, but I’m not sure how I feel about that yet! 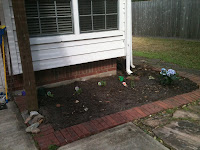 My little herb garden. One plant of each kind, planted in alphabetical order. It’s a start! 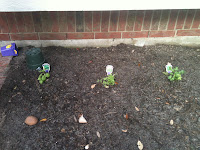 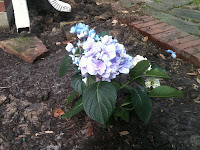 My Valentine’s Day hydrangea. Michael said he wanted to get me flowers that we could plant outside. 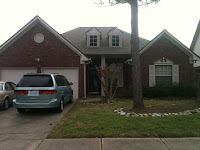 The front of my house. And the back of the Swagger Wagon. Note the neatly-pruned Crape Myrtle.
Share
Pin
Tweet
Email
Print

I'm Erin, a Catholic wife, writer, speaker, and mother of six. Since I started this blog way back in 2009, my life has been a roller coaster of babies, plot twists and a plane crash or two. I've been chronicling things here as I've been learning to love and suffer and laugh and trust in the goodness of God day by day--with a little espresso and a lot of faith. Read More…

For Better or for Worse: Our Year of Trusting God through a New Job, New Business, New Baby, and a Plane Crash

A Coffee Talk for the Little Years

15 Tips for Praying with Your Family