Michael and I attended our very first Rockets game tonight, and had a great time! Neither of us are big basketball fans, but we definitely both enjoyed ourselves a lot. It was fun just getting out and doing something fun like that together. My boss had some extra tickets for the Rockets game against the Charlotte Bobcats tonight, and she insisted Michael and I make a date out of it. Which we did, Franco-style. 🙂
For dinner, I got the night off with cooking and we ordered in South Beach-friendly dinners from our favorite Cajun restaurant, Abe’s. Our friend Max came and picked Gabriel up at 5:30pm, so we had a nice, quiet little dinner to ourselves at home after they left. I had a grilled shrimp Caesar salad (I did eat the croutons though, but I don’t feel bad:) and Michael had grilled catfish with crawfish etouffee and green beans (no rice). We ate casually sitting around the coffee table chatting about our day, just like we used to in our little apartments when we couldn’t fit around the kitchen table, so always ate in the living room. (Gabriel actually ate his first solids at our little coffee table when we were still at the apartment we had before we bought our house). So dinner tonight was romantic in a nostalgic kind of way really. 🙂
I have to confess something though. We totally blew The Diet at the game, splitting a (Tiny and Extremely Overpriced) pizza and soft drink. It was a date night after all though! And even though we spent the rest of our eating out money for the month on a second dinner we shouldn’t have eaten, it just added to the experience. We felt like excited little kids whose parents let them get a real concession at the game instead of having nothing or packing in a turkey sandwich. Which we’ll probably do to our kids at some point (both the packing in a turkey sandwich and the letting them get a real concession parts. 🙂
Despite blowing our diet today, we’re both still committed to and excited about South Beach. Besides, I have so much food in the fridge and freezer planned out for the next two weeks that we don’t have a choice but to stay on the diet anyway! 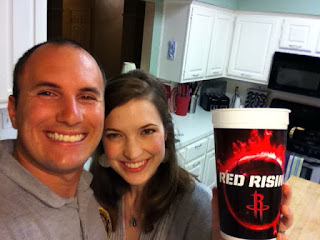 Proof that we went to a Rockets game! (And proof of our guilt. That root beer was GOOD though:)
Interestingly enough, a friend from church randomly asked Michael if Michael wanted a bunch of tickets to the Houston Aeros hockey game this Saturday night. So, we’re going to another professional sports game in the next few days!
It’s crazy how we suddenly get offered free tickets to two pro sports games in one week?!
Share
Pin
Tweet
Email
Print

Previous Post: « Some Home Videos, and the start of a South Beach Adventure
Next Post: South Beach update »

I'm Erin, a Catholic wife, mother of five, and business owner. I'm seeking peace and finding joy one perfectly imperfect day at a time, with a little espresso and a lot of faith. I've been speaking and writing on marriage, faith, and motherhood since 2009. Read More…

A Year of Favor

Why I Don’t Hate NFP Anymore

How To Tell Those D-Words Where To Go

Saints were people too